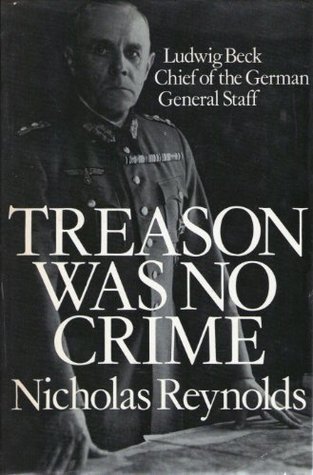 This book was the first critical biography of the Chief of the German General Staff from 1933 to 1938 who became the head of the German Resistance to Hitler in World War II.  Departing from the prevailing narrative, it explored how Beck had to overcome his own conservatism to become a conspirator.  After being published in England, it was translated into German by Bismarck's grandson, and published in both hardback and paperback.  Though well received in England, it attracted a good bit more attention in Germany, where the debate was far from settled about Hitler's crimes and the Army's share of responsibility. Publications from many parts of the political spectrum printed favorable reviews.

"Beck led the General Staff from 1935 to 1938.  He resigned during the Sudetenland crisis when he realized that Hitler's foreign policy would lead to war. … The American Reynolds has, to a surprising degree, penetrated the psyche of Prussian conservatism.  He clearly describes Beck's change … from apolitical soldier to active conspirator [against Hitler].  His contribution to the history of the 20th of July [plot] deserves recognition." — Translation of review from German periodical Buchbrief [Book Letter]

"It is hard to understand this [West German] lack of interest [in the Resistance to Hitler] after one picks up a book like … Reynolds's Beck … . [The] events of ... dramatic intensity … [that are] portrayed here … should fascinate anyone with even the slightest feel for history and politics… ."— Translation of review by General Count Wolf von Baudissin, Die Zeit

"The evolution of Beck's views [as described in this book] is most enlightening and convincing.  … [I]t enhances rather than limits his greatness.  The tragic conflict of loyalties, and the ultimate triumph of humanism over traditional nationalism, [trumps] … any possible myth [of Beck's lifelong] perfection … ." -- Aladár Szegedy-Maszák

This ... chronicle of human frailties and .. courage, of self-delusion and the gradual, irresistible, compelling revelation of evil is told by Nicholas Reynolds with a wealth of fascinating detail ... .  — from the introduction by Sir John Wheeler-Bennett

The text … is straightforward, clear and organized with precision.  The story of Hitler's perversion of the proud old Prussian officer caste is an important one and, in this book, it is well told.   — The Spectator

Treason was No Crime, Ludwig Beck, Chief of the German General Staff (German Translation: Beck, Gehorsam und Widerstand)
“A painstaking and readable biography…,a valuable addition to the record.” — London Times
Basrah, Baghdad, and Beyond: The U. S. Marine Corps in the Second Iraq War
“A battlefield history … that reads better than fiction.” — Gary Solis