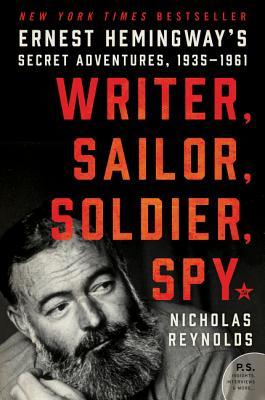 The backstory is only a little less dramatic.

In 2010 I was the historian for "The Best Museum You've Never Seen," the CIA Museum, which winds through the corridors of an Eisenhower-era office building secluded on a secure campus in Northern Virginia. We were getting ready to install a new exhibit on the Office of Strategic Services (OSS), America's first central intelligence agency, dating to 1942. I was tasked with finding out everything I could about this experimental organization.

Hastily pulled together to fight the Axis, OSS was an odd creature—at once a collection of men and women from the upper crust of society on America's east coast, and a magnet for astonishingly talented and creative people from all walks of life, from Wall Street lawyers to Hollywood filmmakers, to freebooters and soldiers of fortune, even the future chef Julia Child. In OSS they could almost literally design their own adventures.

My head swimming in research, I made an offhand connection one day that would lead to uncharted waters. I remembered reading long ago that Ernest Hemingway and Colonel David K. E. Bruce of the OSS had "liberated" the bar of the Ritz in Paris from the Germans in August 1944. Now I wondered if there was more to the story. Hemingway would not have been out of place in OSS. He loved secrets, and the edge they gave him. He craved action, but was not cut out for conventional soldiering. He moved easily between social and economic classes—and across borders. I thought to myself that he had a lot in common with many of the men in the spy business whom I had met or read about. So had he been an OSS spy of some sort? What was the full story about Hemingway and intelligence in World War II?

I proceeded to check every source I could find. After a few months of work, I started to see the outline of a Hemingway portrait that was different from the others I had known. The writer had—almost obsessively I thought—tried his hand at various forms of spying and fighting on two continents from 1937 on, before and during World War II. The way stations were varied, often exotic: the battlefields of Spain, the backstreets of Havana, a junk on the North River in China. He seemed to gravitate to the irregulars, men and women who operated on their own, and stayed out of the limelight.

And then I learned something that surprised me: he had signed on with another intelligence service, one that did not fit the conventional narrative of his life. That service turned out to be the Soviet NKVD, the People's Commissariat for Internal Affairs, the predecessor of the better-known KGB that, despite its name, operated both at home and abroad before the Cold War.

I stumbled on the NKVD connection when checking to see if I had covered all the bases in my research. On a fateful day I pulled off the shelf a 2009 book cowritten by an estranged former KGB officer, Alexander
Vassiliev. The work incorporated verbatim excerpts from Hemingway's official Soviet file that Vassiliev had smuggled out of Russia. Vassiliev's evidence seemed solid. The records showed that a Soviet operative had recruited Hemingway "for our work on ideological grounds" around December 1940, at a time when Stalin ruled the Soviet Union with an iron hand and was aligned with Hitler under the Molotov-Ribbentrop Pact—to say nothing of the bloody purges that had started in 1934.

A lifelong Hemingway fan, I felt like I had taken an elbow deep in the gut when I read that he had signed on with the NKVD. How could this be? He had always had many friends on the left, but he had never subscribed to communism (or any other ideology). The characters he created embodied so many American values we still cherish: truth, bravery, independence, grace under pressure, standing up for the underdog. His voice was uniquely American—and revolutionary. He had changed the course of American literature in the 1920s. Weeks before, he had published one of the century's greatest political novels, For Whom the Bell Tolls. Why would such a man align himself with Stalin? And why would he do it secretly, which would mean hiding the truth from his friends, families, and readers? His greatest work, after all, came from sharing, not hiding, his life experiences.

Now I was hooked. After finishing work on the OSS exhibit, I went in search of answers to the questions that troubled me. Was there some mistake—perhaps in translation or transcription? If not, how could this have happened? How did the recruitment fit into the bigger picture? And what did it mean for the Hemingway legacy?

The principals were dead—Hemingway's Soviet recruiter died in Greenwich Village on Thanksgiving Day in 1943 (like more than one of his capitalist enemies, he had a heart attack after the big meal); Hemingway himself committed suicide in 1961. His closest confidants were almost all gone. I realized that, for the most part, I would be relying on the printed word like the Soviet record, never officially declassified, along with private papers and letters meant for only one set of eyes. I hoped I would find enough information in archives and libraries to understand what had really happened.

And so I set out on a quest, day after quiet day, in reading rooms all over the country, from San Diego to Seattle, Key West to Boston. Early on I immersed myself in the Hemingway papers at the JFK Presidential Library. While I leafed through the collections—the writer had been a packrat, a collector who hated to throw things away—I sat in a cozy space that was decorated like his living room in tropical Cuba, complete with animal skins and, on a table next to the sofa, what looked like a real pitcher of daiquiris until you tried to pour it.

Research has always been endlessly seductive for me. It felt right for one visit to the archives to lead to the next. One more obscure book about the Spanish Civil War, or World War II, or the Cold War was never enough. I found new and unusual sources, such things as the private papers of an NKVD general in the U.S. National Archives, those of his FBI handler in another Washington archive, the records of a dispute with his lawyer in the New York Public Library that seemed at first glance to be about copyrights. Then, one day, under the dour gaze of the late John Foster Dulles at the Princeton University Library, I ordered a little-known cache of Hemingway letters, and buried in pages of text,  found the keys I had been looked for.  And so, after three years, the many pieces of evidence came together to reveal the Hemingway who had been hiding in the shadows for over 50 years. — The Author

“A painstaking and readable biography…,a valuable addition to the record.” — London Times

Basrah, Baghdad, and Beyond: The U. S. Marine Corps in the Second Iraq War
“A battlefield history … that reads better than fiction.” — Gary Solis